I said on the ‘About’ page that all the works in the Gallery had been sold, but this was a slight exaggeration – if only by one. Sadly, no one seemed to want the Bush Turkey. 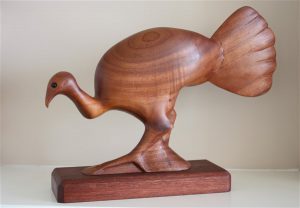 I must admit that I was a bit  disappointed as I thought she was one of my better pieces. This was probably just the usual hubris of the creator being confronted by the nemesis of public opinion, but there did seem to be another factor at work – local antipathy towards bush turkeys. Several visitors to the gallery remarked that they quite liked it as a carving, but didn’t want a reminder inside their homes of a creature that caused such havoc outside.

I had to concede that they had a point, as we had ‘fallen fowl’ of the mating habits of a pair in our garden a year or so ago. We should have known better, – spreading a large load of pine bark mulch in the early spring to keep moisture in the ground through the hot summer. This is just the time when female turkeys, as with the females of several other species judge the quality of potential mates, not only by their plumage, but by their worldly goods and construction skills. The males enthusiastically demonstrate their prowess by using their powerful claws to build egg incubating mounds a metre or so high and several metres across. Mulch is ideal building material, as bacterial fermentation generates the heat necessary for egg incubation. Broody females are not easily impressed however, and repeatedly check that the temperature is just right by digging small holes in the mound and inserting their heads as thermometers. Re-spreading the mulch is useless – turkeys can restore their mounds overnight and will do so repeatedly. As this video shows they will fiercely defend their mounds against marauding monitor lizards and  carpet snakes , so the average suburban gardener doesn’t stand a chance.

What makes this spirited defence even more remarkable is that it involves a sort of ”sequential ménage a trois’ as the eggs that the female deposits in her newly constructed mound were fertilised by another male on some earlier romantic evening,  The line of her latest paramour will be continued, but in the mound of her next conquest. This may perhaps explain why, as shown on the above video, the emerging chicks are not treated much better by the cuckolded male than are poacher lizards.

So we called for the Turkey Relocation Man who uses a trap for the males baited, not with food, but with just a mirror at the far end. The males, in common with some of those of other species, are  rather vain and aggressive, and not very bright, and will attack the apparent rival by vigorously pecking at their own reflections in the mirror long after the trap door has snapped shut behind them.

There was however a happy ending in the case. Our daughter, who lives in Wyoming USA, where winter temperatures can drop to -20 C even before wind chill adds its bite, was happy to provide a refuge the turkey as a welcome reminder of her warmer childhood days in Brisbane. We made sure that the refugee didn’t arrive until after Thanksgiving.