– so too in a block of wood, but sometimes it’s pretty well hidden … 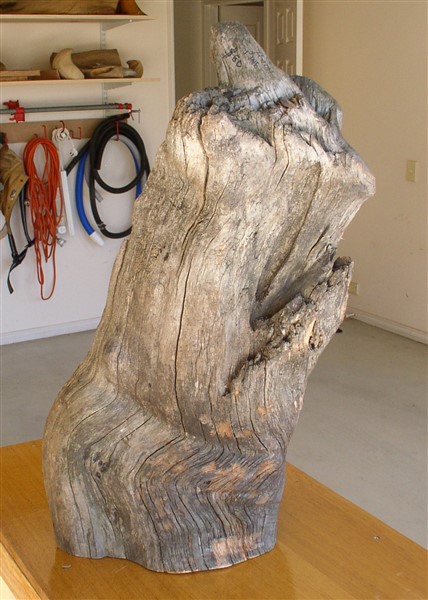 In this case for example, I would have to admit that beauty was probably in the eye of the beholder. It was part of the stump of a fire damaged Huon pine on sale in the ‘irregular bits’ box of  wood dealer Trevor Gaskell’s stand at the Maleny Wood Show. At first the only redeeming feature seemed to the zig-zag lines at the base that hinted at the possibility of  fiddleback – an attractive grain pattern that arises from stresses that distort the growing tree. I had also heard that Huon pine was very good to carve and was a favourite with boat builders because of its water and marine pest resistance, but as I had never worked with it before, it seemed a good opportunity to experiment.

….and turning it round, the graceful backward sweep of the piece raised the possibility that a semi-abstract torso might be lurking in there somewhere, 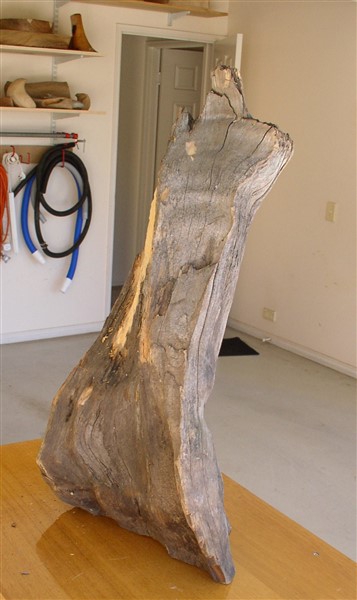 Scraping off some of surface grime and weathering showed that most of the wood beneath was healthy enough,  although there were a few central fissures that might run deep and force a change of plan later on.

Still, this is all part of the fun of carving irregular but interesting wood – you never quite know what’s going to emerge – sometimes a pleasing set of surfaces and curves  – or sometimes just  a small unsightly lump and a large pile of wood chips !

In the event, I thought that this would be the fate of this piece after I had removed all the rough and damaged wood. The central crevasse became progressively wider and wider, and deeper and deeper, until it ran right through from front to back, distorting my imagined torso into a shape that would have taken the talents of Henry Moore to make attractive.  I  therefore didn’t bother taking any more photos as I thought it would all end up as garden mulch. But then a new possibility arose, phoenix-like, from the chips,  as not one, but two torsos began to show themselves, haughtily intertwined like dancers in a paso doble.

This picture shows the end result… 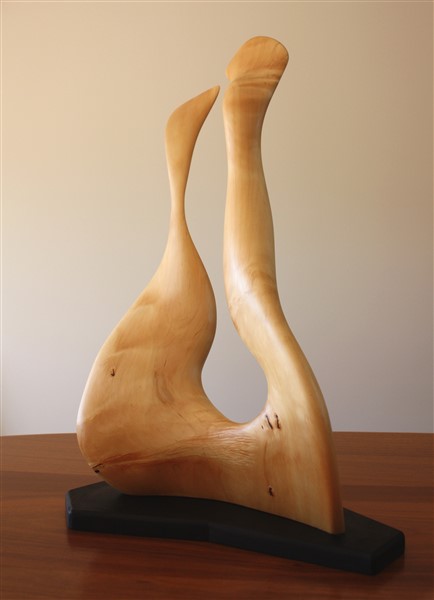 ….with  the hoped for fiddleback  also showing up. 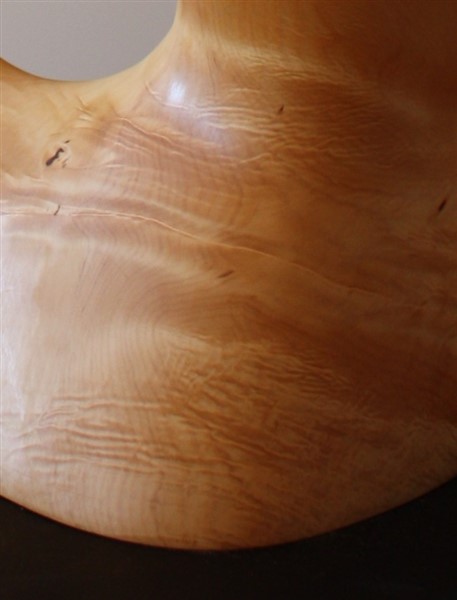 One of the other great pleasures of working with Huon pine is its fragrance due to the release of the volatile oil, methyl eugenol. This obviously also delights the local fruit flies which, as shown below,  land  on the wood and won’t budge even when the chisel blade is within millimeters. 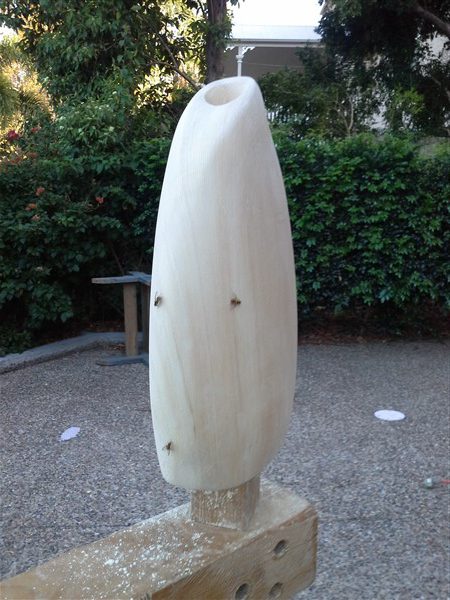 They seem stoned, or more probably smitten, as this oil is apparently a pheromone with potent aphrodisiac properties. This fools the male fruit flies into thinking that a particularly  alluring female is somewhere nearby. Rather unsportlngly , this weakness is exploited by citrus growers by mixing it with insecticide in fruit fly traps.

The other remarkable feature of Huon pine is how it grows and propagates. It’s now quite rare for three reasons – it is only found in one place – around the Huon river is south west Tasmania; it grows very slowly – only increasing the diameter of its trunk by about 1 mm  a year, and, the biggest survival risk of all – it is coveted by humans for boats, furniture and carving. Although it can reproduce by seeding, it more usually  spreads by vegetative or clonal processes. This is a property it shares with only a few other trees such as the bristle cone pine and the aspen found in the USA. Undisturbed, these genetically identical clumps of Huon pine stay around a long time – on average around 1000 years. One all-male stand of trees all with identical DNA was recently found at Mount Read  that  is reckoned to be over 10,000 years old.

Fortunately what remains, especially the naturally fallen timber, is now being carefully conserved and marketed in a way that accommodates demand, and inhibits illegal logging. A video shows this water born salvage program in action

All this raised an interesting thought. The starting piece was clearly only a small part of the original trunk – perhaps split off in a storm, or in a forest fire, or when felled by timber cutters.  From this I made a rough estimate that the original diameter of the tree was probably about 900 mm. So this paso doble duo may have been waiting to strut onto the dance floor for the better part of a millenium .

I usually inscribe my name, the type of the wood, and the year that the piece was produced on the  underside of the base. Perhaps for Huon pine from now on  there should be two numbers : “Year of discovery” and “Estimated time in hiding.”